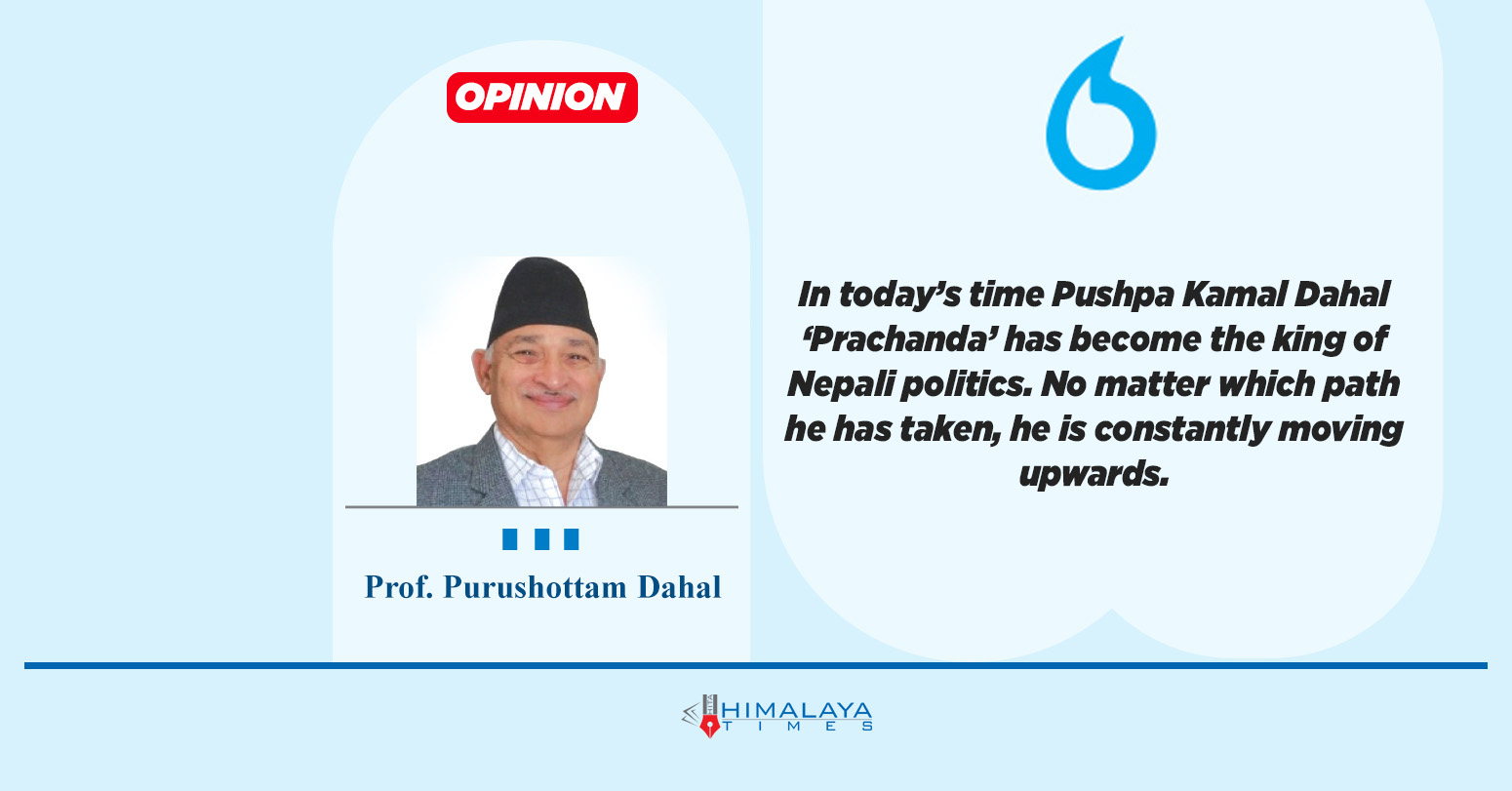 We have been considering the political leaders as supreme and their path as a right one to follow. But the choice to follow the path of a leader as supreme should be a conscious choice.

In today’s time Pushpa Kamal Dahal ‘Prachanda’ has become the king of Nepali politics. Regardless of the route he has chosen he is constantly moving upward. The ability to disrupt his leadership has not been seen in any of his contemporary politician. KP Oli is often discussed as Chanakya, however, it has been proven that Pushpa Kamal Dahal has the ability to use even Chanakya for his benefits. This also supports the fact that if the present politics is evaluated, Dahal can be considered as a supreme in politics.

There is a saying in English: Never limit yourself, we live in a limitless world with endless possibilities. Pushpa Kamal Dahal has actually put this sentence into practise. Dahal does not seem to bind himself to any limits, which pushed him to the position of prime minister.

He is not bound by the limits of theory, behavior or discipline. His politics has come this far by the virtue of limitless possibilities.

(b) Dreams with wide open eyes :

I first met Puspa Kamal Dahal in 2050 and conversed with him for three hours at Dr. Baburam Bhattarai's residence in Koteshwar. It was an interesting meet as many doubts were raised constantly regarding Prachanda's existence. Following the conversation, I made a comment on Radio Nepal's very popular show ‘Ghatana and Bichar’: People often dream when they sleep, but an individual dreaming while he is still awake.

He presented his dream very minutely to me. During such long conversation, Dr. Bhattarai did not even utter a single word as if he was only present to witness the conversation. From the initial years, of the past fifteen years, Prachanda laid out the outline to conquer the entire country under his ideology, which he shared in the conversation. His dream was to develop Nepal as the inclusive state of poor and the proletariat. I gave my final response to the  dream; it is comparable to the sweets of  Vanaras.

(c) A ladder built in pursuit of a dream

As his dream, the power of the proletariat is not established, but Prachanda himself enjoyed the success that was built, through his political ladder, on their name. While Prachanda was a student of agriculture, he met late communist leader Roop Lal Vishwakarma (who later in his life abandoned the communist movement and perceived it as an illusion), then he became a teacher and after some time he was employed by USAID.

At that time, he got interested into expanding the borders, hence became a disciple of Mohan Vikram Singh. Within a few years, he displaced Singh and formed a party under his own leadership. He got into the parliament with Janamorcha, only to conclude that the parliamentary system as a failure, in just two years. He became the leader of the party and has been the chair of the party for thirty years now.

During the armed violence that lasted from 2052 to 2062, he received the unparalleled sympathy and support of then kings and courtiers, gathered the financial support from those who planned cultural and religious encroachment to end the religious and cultural identity of Nepal. After the announcement of the tunnel war against Indian expansionism,  he took a lot of help from other security mechanisms. He did not lag behind to take advantage of the unstable, political situation in Nepal. The division of UML and Congress, political leadership indulging in corruption, untouchability and disunity present in the society , indirectly supported their armed campaign and from 060 to 062 they became the top center of politics, the summit of fear and the essence of possibility.

(d) The third hero of the Nepali communist movement

The 12-point agreement of 2062 and the comprehensive peace agreement of 2063 made him the third hero of the communist movement. First Pushpalal, second Madan Bhandari and third Dahal. The place still remains intact.  But acquiring this place did not end his limits. He used Girija Prasad Koirala and grabbed the opportunity to become the prime minister. Later he had no qualms about insulting Koirala himself. Jhalnath Khanal, Madhav Kumar Nepal and Dr. Baburam Bhattarai helped him in his political game. The plan of making the Chief Justice the Chairman of the Council of Ministers to hold the Constituent Assembly elections in 2070 was also directed by him. Nepal's politics as a whole has not been able to become independent.

After 2070 UML leader KP Oli and Nepali Congress leader Sher Bahadur Deuba has been an aid to Dahal's political journey, which started from Roop Lal now has reached this point after surpassing  many twists and turns. No Nepali leader has been able to continuously lead,  stage a successful game of power, be able to bend, give trust, and influence every time in the political journey of nearly 50 years. Even the people from the maoists affected areas have supported and voted for him. There are many accusations against him, innumerable reports on his involvement in violation of human rights have reached places. But he is able to not only the acquire heart of the common people, but take Chanakya like KP Sharma by the hand, to influence democratic leader Deuba, turn veterans like Madhav Nepal into zero,  make the royalist herd bear the burden of their companionship and  sit on the shoulders of Ravi Lamichhanes, who are considered as symbol of the new generation who claim revolutionary change. Pushpa Kamal Dahal has been able to take pleasure in diversities. What can be more unique than this? In the days to come, he should be careful not to carry someone else's gun on his shoulder.

Finally: Congratulations to Pushpa Kamal Dahal 'Prachanda' for assuming the responsibility of the Prime Minister, after overcoming thorns in this journey, and best wishes for an uninterrupted tenure.