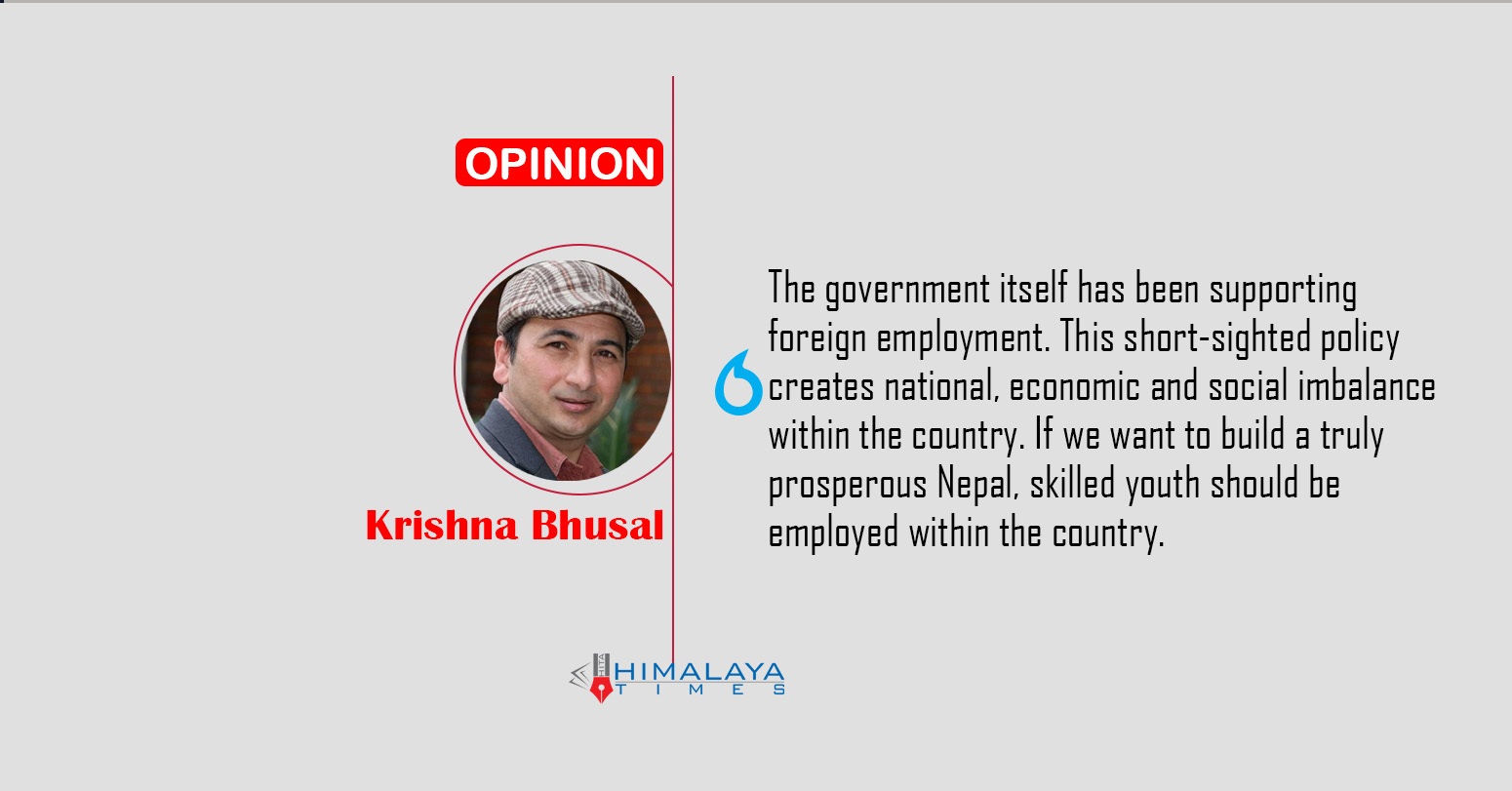 Although, there is an uncertainty about since when Nepalese people started foreign employment, the history tells about people travelling to neighboring countries for employment. During the rule of British Empire in India, people from Nepal secretly joined the British Army.  Historical texts confirm Nepali youths officially joining the British Gurkha recruitment after the agreement with the British in 1942 when Bir Shamsher was in power.

It has been only a few decades that our people have started travelling to countries other than India. As of now, no one in Nepal considers India as a destination for foreign employment. In three decades, Nepali people have preferred the Gulf countries to work. Youths have also reached western countries to study and work. According to varied data, people from Nepal have reached more than 112 countries in search of employment opportunities.

The wave of people going abroad have contributed to the economy positively. Data shows that more than 5 million Nepalese people are currently employed in Asia, Europe, America and other countries, excluding India.

The number of people moving abroad is increasing day by day which is the result of political and economic instability of our country. As, many industries have already shut down and remaining industries are not able to generate enough jobs, people have no other option than to go abroad. The wave of people going abroad have contributed to the economy positively. Data shows that more than 5 million Nepalese people are currently employed in Asia, Europe, America and other countries, excluding India. The number of  illegally employed people who went abroad via India and other routes is also high. Also, the number of women who go abroad for employment is significant. Many are using the Indian route, while some arranged for tourist visa or other arrangements.

According to the latest government data, more than 1,500 Nepali use Nepal's airport every day to go abroad for employment. But, are they all satisfied with their decision? Although there is no official body that conducts a study on this issue, various unofficial studies show that there is a distinct pain, sorrow and sadness in foreign employment. Some of them may have done well in foreign employment, and the remittance is sustaining the country's economy. But untimely death, accident, injury, disability, chronic illness, economic and physical abuse among other are constant misery of foreign employment. Many are suffering abroad due to disorganized state machinery, semi-skilled and unskilled Nepali workers, irresponsible manpower agencies. While many are exploited due to tiring paper procedures, language barriers, false assurances etc. Out of the five million young people who enter the labor market annually, more than two-thirds of them are based on foreign employment.

The wave of opting to work abroad, for household expenses and building a household have been the prime factor of sufferings they have to go through, during their stay. Sweating off their most fruitful years in the deserts of the Gulf countries is not a desire but a compulsion to them. The money earned by suffering abroad has not been properly utilized, according to surveys. A survey has shown that almost 80 percent of the remittance received are spent on daily necessities and entertainment. Only 2.4 percent of the total amount received is spent on capital construction. It is also mentioned in the survey report, the living standards of the workers who went for foreign employment have improved.

Young and skilled manpower, are overseas performing dangerous and unhealthy tasks, whereas foreign employment is easily accepted by the society and the government.

Only elderly people, children and disabled are living in the country. The number of people leaving Nepal to work abroad is also increasing. The government has not been able to utilize the power of youth in order to develop the nation. It is a sad situation where all the effort that goes into preparing a capable manpower is fruitful to other nations. Nowadays, migration abroad is a compulsion rather than a desire among the youth. Young and skilled manpower, are overseas performing dangerous and unhealthy tasks, whereas foreign employment is easily accepted by the society and the government. Rather than creating a suitable environment for employment opportunities, the government has only encouraged people to go abroad for employment.

The government should be aware that no country has developed on the labor wages received from foreign employment. Young people who are considered as the backbone of the national economy works on foreign land for long period of time, then return to the country as an old or disabled citizen of the country. If this phenomenon continues, burden will be added for the country. The proverb applies that a daughter is not raised on the basis of a marriage. Remittance is not enough to develop a country, creating employment opportunities in the country is the way to go. The government itself has been supporting foreign employment. This short-sighted policy creates national, economic and social imbalance within the country. If we want to build a truly prosperous Nepal, skilled youth should be employed within the country.

Nepal, known as the heaven on earth, is facing this situation due to political instability. Nature has given us invaluable worth of wealth. We have rare medicinal herbs and forests, variety of minerals, stones and sand that are our gems.  Also the natural beauty itself is astounding. Therefore, Nepal can be economically self-sufficient only through investing on the tourism sector. However, we are not able enough to utilize our wealth but, are showcasing our poverty in the world. It is time for youths to give shoulder to the situation and investigate the real problems.

The government should adopt a policy of using the youth  in the development of the country and not only enjoy the remittances, as it only brings temporary benefits.

Economic characteristics of Nepal are water, forest, herbs (agriculture) and tourism. It is only possible to undergo an economic revolution in Nepal by investing on these four sectors, not through industrialists who must import raw materials from abroad. Nepal should also focus on export-oriented industries and stop the migration of youth. Nepal is rich in cultural and natural diversity which attracts many tourists. All thanks to the culture, language, dress, and religious traditions of the ethnic groups living here, Nepal is one of the most diverse nations in the world. Therefore, the languages, cultures, costumes, religions and traditions are the pride of Nepal.

But why is Nepal unable to step up despite being endowed with history, culture, natural means and resources is a daunting question. First of all, the government should adopt a policy of using the youth  in the development of the country and not only enjoy the remittances, as it only brings temporary benefits.

Youth is the backbone of every society and every profession. Security demands the tactical skills, security awareness, and courage of the youth. Construction requires the dedication, sacrifice and refinement of the youth. Enterprises without youth cannot bloom. Sports without youth is either a child's game or a religious ritual dance. These aspects show us the true picture of what nation we are trying to build with our youths working abroad.