When should one resign?

After the erosion of public integrity 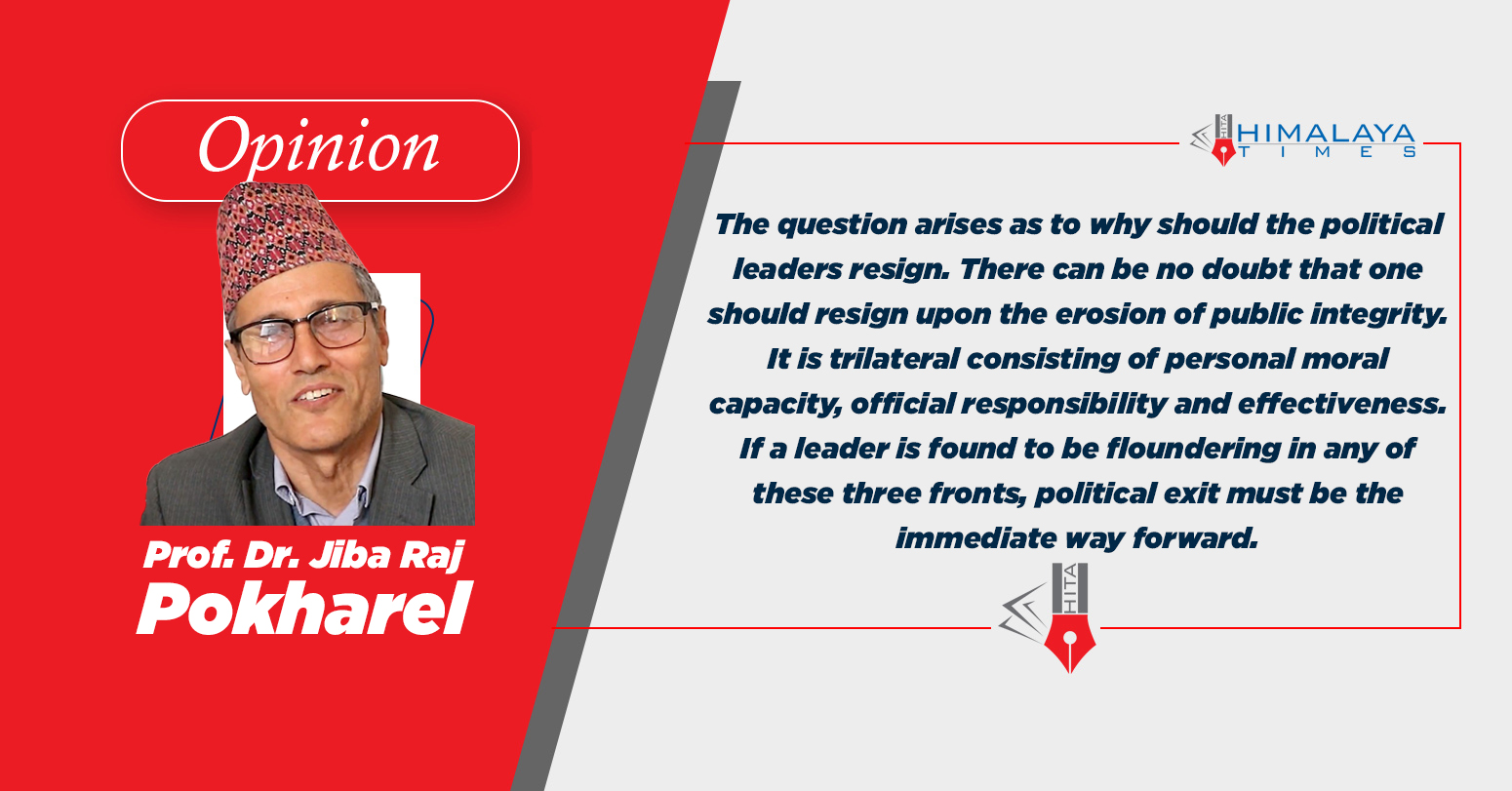 Nepali politics has been displaying multipolar tendencies with the Ultra-leftist Maoist Central(UML) at one pole followed by the rightist Rastriya Prajatantra Party in the other. The leftist United Marxists and Leninists(UML), the center Left Nepali Congress(NC) form the intermediate poles of contemporary Nepali Politics. The other parties are like satellites of these main parties.

From this multi polar scenario however emerge the MC, UML and NC very prominently like islands amidst the sea. More eminent are Prachanda, K P Oli and Sher Bahadur for their profound influence in these parties. However, their contribution to the country has been taking a nose drive from the dizzy height that it scaled one time back in the past. Dizzy height because all the three persons ended being Prime Minister in more than one occasion after the country entered into Federal arena. Nose Drive now because their voters have migrated to the newly emerging National Independent Party. Though nobody has openly asked for the resignation of Prachanda and K P Oli because of relatively lesser freedom of expression in communist parties, the rival group in democratic NC has already asked for the resignation of Deuba especially after its debacle in being pushed into the opposition bench despite being the largest party of the Parliament. In fact, Prachanda and Oli also deserve the askance of resignation in view of their dwindling performance over the years.

The question arises as to why should the political leaders resign. There can be no doubt that one should resign upon the erosion of public integrity. It is trilateral consisting of personal moral capacity, official responsibility and effectiveness. If a leader is found to be floundering in any of these three fronts, political exit must be the immediate way forward.

Personal moral capacity is about ensuring that no questions arise about the leader's image. All these three leaders have been alleged to amass huge fortune illegally. Mr. Deuba has been accused to have siphoned huge amount of money in the wide body aircraft procurement. His rival Mr. Oli is said to have hob nobbed with Omni during the procurement of the Corona Vaccine. And Prachanda has been questioned for staying in the house of the contractor who has bagged several contracts with a few or none been completed in time. Though there are not substantial evidences to prove these allegations at least in the first two cases, the leaders' nonchalance in not seeking for clearance from these allegations through the establishment of an impartial inquiry commission seeks to prove their complicity in these affairs.

Official responsibility is about fulfilling the demands of office. Mr. Deuba has not been able to appoint the office bearers like the treasurer of Nepali Congress. He has neither activated the departments nor held the election of the brother organizations under the party. Mr. Prachanda has yet to find a General Secretary.

The effectiveness of all these three leaders hopelessly exposed in the last election. NC has lost 8 per cent of the voters, UML 6 per cent and MC 3 per cent mostly to the newly emerged NIP. It can thus be seen that the ace political leaders have been beaten with their thumbs down in all the three fronts of political integrity. However, all the three leaders have been clinging to their posts to the embarrassment of their supporters and countrymen.

Resignation is withdrawal from continued preoccupation. In fact, our culture has given priority to this phenomenon. The human life is considered to be of hundred years. In the first 25 years, one has to observe celibacy in Brahmacharyashram phase which has to be practiced till one engages in wedlock. In this stage, one has to gather knowledge and skill required for a decent living. After marriage one enters into household stage or Grihasthashrama where one has to produce children who will shoulder the responsibility of managing the world in later years. It is followed by retirement when one is about 50 years of age which is also known as Banaprasthashram or dwelling in the forest. After a person is 75 years old, entry should be taken into hermitage which is a period of renunciation.

Our senior leaders have reached a stage when they should have long withdrawn from worldly activities and for some like Deuba the time has come to enter into sainthood. This is the time when one should write memoirs about ones' experiences which are a plenty with the three senior leaders. Most of the philosophical treatises like Upanishad are said to have been written under such circumstances. But reading and writing has been like a brother in law to a classical sister in law in a traditional society where the sister in law should remain at a distance from the brother in law.

Only B P Koirala and Ganesh Man Singh published notable memoirs. Especially the memoirs of B P Koirala Atmabritanta has been an eye opener to the political events of that period. In fact, one cannot write by himself but even can resort to the help of an accomplished writer. For example, the memoirs of Ganesh Man Singh entitled Mera Kathaka Panaharu was written by Math Bar Singh Basnet, a well-known journalist.

Having stumbled badly in almost all the three avenues of public integrity, it is high time for the trinity of Nepali politics to say good bye to the politics of Nepal in an active capacity and serve as the advisor. It is time that they groom the promising leaders of their respective party rather than engage actively in the political affairs of the country.  Clever persons retire in their hey days as they are remembered for ever. The glaring example is Imran Khan, the fast bowler and Cricket Captain as well as the former Prime Minister of Pakistan. Those who retire after reaching the nadir of their career are soon forgotten. This is likely to be the case of the trio of Nepali Politics in view of their present mindset.

The author is the former Vice-Chancellor of Nepal Academy of Science and Technology (NAST).